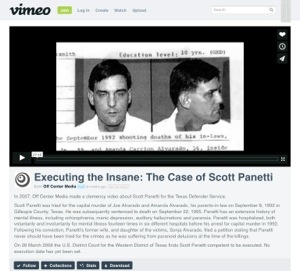 It’s disappointing that this story has not more media attention until very recently. Maybe it’s because he was permitted to represent himself, that he wasn’t able to have a proper defense. However, the attempts to subpoena Jesus and JFK should have raised some questions. If that was’t enough, being hospitalized 12-times over a 6 year period, due to his schizophrenia diagnosis should have been considered at sentencing. This shouldn’t be a surprise, since Texas executed a man with an IQ below 70 . Scott Panetti is scheduled to die today, by lethal injection, for killing his in-laws. It’s stories like this that make me push for increased awareness about mental illness. Below are links to articles about the case, as well as a link the the Change.org petition.

**UPDATE**With just under 12 hours before  Scott Panetti was to be executed by the state of Texas, an appeals court issued a stay Wednesday morning,  click here to read the full update .

Chrissie K has learned that mental illness is nothing to be ashamed of and mental health is just as important as physical health. She hopes to increase awareness and erase the stigma, especially in the Black community, by sharing her own story and encouraging others to share theirs. Chrissie K started Speak Away the Stigma last year, to promote mental illness awareness. Twitter: @SPEAKawaySTIGMA IG: @speakawaythestigma FB: Speak Away the Stigma Email: Christina@speakawaythestigma.org View all posts by Chrissie_K